How to fight – Part 4: Practical tools (that stopped a war between two Nigerian tribes)

I said earlier that 80-90% of conflict resolution is attitude, but for the remaining 10-20%there are also some skills & techniques you need to practice to effectively get others to “re-open their hearts” in tough conflicts.

I’m taking this image from two mediation trainers I love and respect, Liv and Kay Larsson. (You can find their awesome book on mediation here).

It all lies in your hands…

Central to everything to everything conflict resolution related is your ability to empathize with everyone involved. This is not some lofty, touchy-feely kind of thing, it means something very specific.

Note: both are “valid” ways of reacting. One will get you the connection and transformation you want though, the other won’t. In the former one you can still allow yourself to be angry (and not show yourself vulnerable), in the latter, being angry doesn’t make any sense. You just see a human being in pain – how could you be angry with that?

There are some shortcuts to this.

Often, the negation of the judgement is the need. “You’re inconsiderate” means “I need consideration (for my needs)”. “You’re arrogant” means “I really want to have relationships on eye-level”. “You’re disrepectful” means “I need respect (e.g. for my way of seeing the world)”. And so on.

The funny thing is: Often, the thing that’s letting conflicts escalate is not the conflict itself but the frustration about not being heard. If the needs of both parties are heard and valued (ideally by the respective other party), most of the heat suddenly vanishes out of the conflict.

You need to excercise this a lot though to be able to use it in heated arguments.

I’ll show you a simple exercise below.

If you have conflicts with people who don’t read my blog, often you also need to make sure they hear you not with “judgement ears” but with “connection ears”. Even if you express yourself clearly in beautiful need language, you never have the guarantee that it lands with the other person the way you intended.

Then you need to use thumb and index finger to “pull the ear”.

For this technique to work, the attitude is essential. You don’t want to teach, you don’t want to belittle, you just want to make sure that the flow of connection works and that you use your time effectively and joyfully (arguing 2 hours merely because the other person misunderstood something you said in the beginning: that’s my definition of time-wasting galore).

This technique is also essential if you mediate between two people who are having a conflict (because they don’t read my blog – stupid people!).

First, you use the thumb, translating what person A says into needs language .

A: “She’s just so inconsiderate!”
You: “So, I’m hearing you’re really frustrated and you want your needs to be valued as well.”
A: “Yes!!!”

You: “B, can you reflect to A what you understood is the most important thing to her in this moment? This is not to ‘test’ you in any way, it’s only to make sure that you’re not wasting your time by talking past each other.”

B: (arms crossed) “She thinks I’m an inconsiderate prick!”

You: “Oh, thanks.* I heard it a bit differently. I heard that when you slam your door, A feels really frustrated, not because she thinks you’re a bad person or anything, but because she really wants her needs to be valued. What has landed with you now?”

This sometimes, especially in conflicts with a long history, takes a bit of back and forth.

But it works! Even when you mediate between, say, two tribes in Nigeria that are stuck in a violent conflict which led to a quarter of the population getting killed in the last year. As Marshall Rosenberg, the person who developed a lot of what I’m teaching you here, did. (I actually cannot imagine doing anything more badass – and fulfilling. Film-makers, where are you on this one?)
Jump to 3:47 to get the full story. 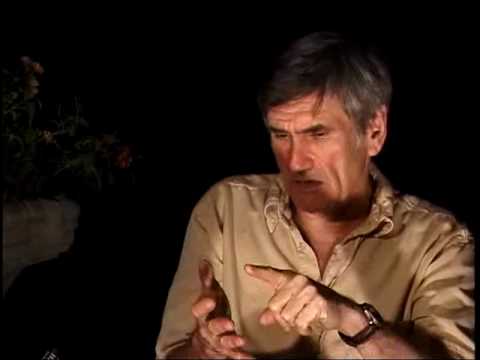 Of course you don’t pull the ear when connection and communication flow, this would only create irritation. You use this to support people to become reconnected.

*The subtext of “oh, thanks” is: “Thanks for meeting my request. Thank you for contributing to us using our time wisely by telling what landed with you, so we can clear that up.” But you don’t say that, obviously, because your sentences are already too long. You only say that when you think it needs clarification.

Sometimes, to get the flow of connection going, you first need to interrupt the blame-spiral.

This can take several forms, from a mere “Just a moment, we’ll get to how that is for you in a bit. First, can you tell me what you heard B’s needs are?” to touching people and saying their name (if you feel it won’t irritate them or you know them well) to strong gestures, standing up and assertively going in between their eye contact, or more paradox interventions like getting up, dancing and singing a silly song.

The last one might leave people wondering whether you’re crazy and scratching their heads, but then a) their focus is on you and not on them fighting each other (= progress) and b) you can use the the sudden silence to teach a bit about needs and strategies and why you did a paradox intervention (to help them connect), which will help the process.

And more importantly, both would have learned something about each other’s motivations, and the beauty of the needs behind their respective actions.

If you speak German, here’s an article with a translation of what they’re saying.

4. First-Aid Empathy: Making sure people stay with the process

Sometimes when you ask people to reflect back the needs of the other party, they can’t, because there’s too much emotion that needs to be expressed first. If people don’t have the trust they’ll be heard, the can’t really hear anybody else. They can pretend to listen, but it won’t really land with them, it won’t touch them.

First-Aid empathy is like a quick shot of medicine.

You: “I understand that hearing this is really hard for you and you want to be heard in this as well.”

You: “We’ll get to that in a minute, okay? I’d first like to make sure A’s heard fully. Can you hold on for so long?”

If B doesn’t say yes in such a situation, you can also ask A if it’s okay to shift the focus to B for a bit. If A says no to that it makes sense to split up the mediation and give each party empathy separately until they feel enough trust to be able to meet again in one room.

5. Self-Empathy: Helping yourself to remain open-hearted

Sometimes, as a mediator, you see yourself subtly taking sides, developing judgements about one person (“Why won’t he listen?! Must have something to do with his father issues…”) or the whole situation (“Why are they both so stupid?!”).

This doesn’t help the process at all, so you need to train your skill of swiftly translating your own judgements into needs as well. Into “He isn’t listening and I’m really frustrated. I want some ease and I want to contribute, but right now I don’t know whether I can. And I’m sad about that.” and “I’ve tried 3 times now to pull their ears and they still can’t reflect each other’s needs. I’m getting bored and frustrated; I want to contribute and I’m running out of ideas how.”, for example.

This is especially important because there is a thing called “empathy gaps”.

As a human being you amass positive experiences and a lot of painful, sometimes traumatic ones. If you don’t get empathy and understanding for your pain in the painful situations, you carry a wound. And you cannot empathize with people who trigger this wound. This leaves a gap in your “empathy landscape”, the things you can feel empathy for.

How do you close those gaps? You gather people who are experienced in this kind of empathy giving, try to bring up this old painful experience and get some belated empathy and understanding for how you felt when it happened.

“I was 5 and I just really wanted to be held and be safe.” This kind of stuff.

Sounds suspiciously like therapy – and it is. A very effective kind of therapy, I can tell you out of own experiences.

A mediation training I participated in focused at least 60% of its time on closing those empathy gaps – for good reason.

It just makes it a lot easier to stay in the attitude we’re talking about here.

*Violence is meant here in all forms: Emotionally, physically, structurally, spiritually and so on.

Now, I don’t think those are just skills for specialist. I think everybody should learn this. In my experience, it not only makes you more equipped to create harmony in your surroundings, it makes life with yourself a lot richer, more fulfilled – and easier.

It’s the old “You are the person you’re going to spend the rest of your life with. Make sure you enjoy that prospect.”

For this you need a list of needs. Get yourself one here or here.

1) Reflect on one thing somebody did recently that you didn’t like. Try first to self-empathize. What need of yours wasn’t met with what he/she did?

If you feel you’re clear on what was going on for you (which might take 2 minutes, or sometimes 2 days), try to empathize with the other person: What (positive!) need was he/she trying to meet or to express? Was he/she successful?

How does it feel to think of the other person that way instead thinking something’s wrong with him/her?

(It helps if you do this in writing. Try the headlines: “What the person did”, “My needs”, “Other person’s needs”, “general reflection about life” (you don’t need the last one))

2) Reflect on one thing somebody that you really liked. What need of yours did that meet? What need was he/she trying to meet? Did he/she succeed?

And now feel the warmth and happiness spread in your body. ;)

Oh, and please: post your exercises in the comments so that we can all see, celebrate and learn from them (and you can get feedback from me).

(This is the combined article of days 17 to 22 of the 30 day blog challenge. To be notified of new posts, subscribe to the mailinglist on the right.)

Hi, I'm Georg, founder of the social businesses soulbottles and soulwater.
In here I share my experiences and try to teach you what I wished I'd known earlier about changing the world for the better.
Follow @georgtarne

Get New Posts Into Your Inbox. L ike, Hot out of the Oven!